My Reflections from NCTM Annual 2018

I'll admit it: I have had some amazingly good and some amazingly "meh" experiences attending NCTM conferences in the past. It is a big investment of both time and money, and I sometimes felt as though I couldn't justify it based on what I felt I got out of the conference.

This year, however, that changed. This was, by far, the best NCTM conference I have attended, which has caused me to reflect on why. Here's what I have come up with so far:


Tracy Zager put a call out for volunteers for NCTM Game Night and I responded saying I would be happy to help. In typical Tracy form, she was inclusive and thoughtful and started a Twitter group message involving those who voiced interest. I got to meet people from all over the U.S. and Canada, and felt part of the community that had previously felt a bit too exclusive to want to break into. I also volunteered at the #MTBoS booth one morning (more about that below).

I also made an effort to talk to people in every session, beyond the basic sharing of name/location/role, but asking real questions and having deep discussions about teaching and learning mathematics. What an opportunity that I have neglected to take advantage of in the past!

Since my last #NCTMannual experience, I have become much more active on Twitter. This enabled me to choose sessions in a more informed manner (Have I already heard what this person has to say via social media? Is this someone I've only briefly encountered and want to know more?) and I also finally got to attend a session with Sara VanDerWerf, whose blog and energy have inspired me for years (her session did not disappoint). 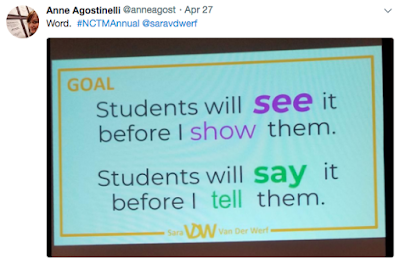 I volunteered to work the #MTBoS booth and got to meet some amazing people, and also spread the word about how Twitter in general and #MTBoS specifically have helped me grow as an educator. SO many people said, "I don't have time for Twitter." This is such a common thing that I hear from colleagues, friends, and professional connections. Is this something you struggle with, too?

3.  I took time to reflect on my learning each day.

I wrote in a journal about the ideas that resonated with me and followed up with people's blogs and websites after hearing from them during sessions. This was a way to solidify some of the ideas I Tweeted about during the conference and marinate in them after the "conference high" to bring them back to my context.

I learned a lot at #NCTMannual, and one of the biggest takeaways is a set of strategies for making the most of conference experiences. Please comment with your ideas, too!
- April 28, 2018

I've had some travels in my teaching journey. I began working at a school I had done some of my college observations hours in and was he...